Believe it or not, you only have to say: "Fuzzy-Pickles! Wiggly-Jiggly! Itty-Bitty-Magic-Bits"
and all you want is happening. Or is it?
A wonderful story, not only for the young.
Magic Island, Purple and red Wizards, Hook-Eyed Cyclops Monsters. And Steven and Megan, who was magically wished away from their School outing visiting Merlin's Cave, by the baby Scratchit.
But that is not all. You have to get the book to get the full story.
wonderfully written, easy to read. Great for children. Hi prices for it.
I have started with the second book, but now i have to get the first and will see, how all started.

Absolutely love this book! As a KS2 specialist, this book is such a wonderful read aloud. The language is fantastic and really engages children. I am honoured to have both of the books in this series so far and neither disappoints. The characters jump off the pages and the storyline is full of interesting twists. A pacey read for reluctant readers who will love the action in each chapter too - never a dull moment. If children love books about wizards, witches and sorcery this magical pursuit will be one they enjoy!

This book arrived promptly in a neatly sealed package. I bought the book as a birthday present but couldn't resist breaking the seal to have a peek. What a beautiful book! The text is very readable with great illustrations. What a great book for that precious time of shared bedtime reading.

Have just finished reading 'Magic Islands ' with my 8 year old who absolutely loved it. Full of magic and adventure, keeping us both enthralled.

5.0 out of 5 stars Magical Adventure for any child!

Great read for all the family, filled with intrigue and magic! Great twists and turns which will leave you wanting more! 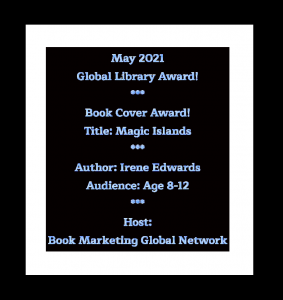 to the Magic Islands, the children feel lost and are quite unsure of their new environment. They have

meet Nester the Jester, his strange pet – a dragon named Vanhalen, Ambrosious, the Wizard of the

magical Enchanted Forest, Eglador, their guide, the Aliens of the Heavens known as the Purple Wizards,

mischief which the children witness and they are asked to solve the islands problems, capture the wizards

and return the islands to peace.

Prologue: ‘Magic Islands’ (Book One): “Somewhere along the coast of Wales, there once existed a small

group of islands. They were mysterious islands, often believed to be magical islands. Some were

mountainous and craggy, others only undulated from high to low levels, from hillside to valley.

…..The islands had few visitors, for the journeys across the seas to these islands were often treacherous,

the seas around them being moody and the pathways unclear.

…..It is said many ships had vanished in the rough waters and never returned home to Wales. When ships

returned homewards, their sailors refrained from venturing again to the islands for they feared the mighty

waves and great anger of the choppy seas. …..Ancient mariners often returned telling mystical and magical tales of having spied from a distance a

curious clan of magical dwellers on the islands.

…..But there was never any proof of such tales.

…..As time went by the islands faded and vanished and the tales of the magical islands were soon

Forgotten until now! Author Irene Edward unlocks the mysteries of these fictitious Islands.

…..“This Magical Enchanted Forest is the strangest of places,” Megan glanced through the trees as she

spoke. Hundreds of cuckoos called out their cuckoo songs tunefully. The woodpeckers were hammering

at branches with their sharp beaks.”

…..Above the children’s heads, hawks and eagles squawked eerily. But although the forest was oddly

noisy, the children became alarmed by the trees, for they were not standing still and rooted, but were

…..“It would help us if the trees stayed in one place,” Stefan said nervously. “How on earth can we keep

away from the paths, when the paths keep moving around everywhere?”

My Thoughts: This is a fun read, where character Stefan and Megan make a wish on a Conch shell found

on the Welsh coastline. Transported to the ‘Magic Islands’ by their wish, the story-line and beautiful hand

drawn illustrations come to life on the pages.

Chaos In The Cosmos: A Magic Islands Story (2) by Irene Edwards

are taken too far, resulting in an urgency to save Planet Earth from disaster before time runs out for the

The story illustrates the way nature can hit out when not heeded or respected, and it shows the impact

climate change can have on our planet in extreme temperatures.

It sets the scene for young readers to learn and understand the effects of a warmer chaotic world, and

aims at promoting such concepts through storytelling and adventure, thus exposing some of the global

issues surrounding planetary warming, as narrated and visualized through the eyes of magic and fantasy.

There are obvious links to the first book in the series ‘Magic Islands’, and in this second book we meet

‘Chaos In The Cosmos’ (Magic Island Story) is book two in the ‘Magic Island’ series. In this wonderful

there once existed a small group of islands. They were mysterious islands, often believed to be magical

Your child will enjoy the familiar characters Stefan and Megan, if he or she has read ‘Magic Islands’. Some

of the chapter titles include ‘Hook Eyed Monsters’, ‘The Spacecraft’, ‘Landing on Mars’, ‘Morning on the

Golden Puddle’, ‘Merlin’s Cave’, ‘The Red Wizards’ Tower’, ‘A Hiding Place’, and ‘Believe It or Not’ to name

The Story Begins: ”The story begins when the “Magic” happens, and the Purple Wizards are sent spinning

from the Magic Islands to the Red Planet, Mars, where they experience a Space adventure on the mystic

planet and its hidden Underworld.

…..In order to escape from the Underworld and from Planet Mars, Izzy Odorous and his gang of Purple

Wizards are faced with having to regain their own powerful magical strengths. With newly regained

powers, they mischievously venture out on a magical mystery tour and later threaten danger to the well

being of the entire Planet Earth.

…..Scratchit is the much feared, adorable, baby Hook-Eyed Cyclops Monster, who creates havoc by way

of his very own busy magical mischief, as he whisks the children, Stefan and Megan, on a terrifying journey

to the Magic Islands.

…..But when the children are confronted with the impending perils of global warming, they are also faced

Let me bring you into the story here:

…..“Cheer up, Megan. Let’s get away from these sand dunes and shelter somewhere cool, such as the

…..How could she feel cheerful? She stood up and trailed after Stefan as he headed for the caves at the

…..“Do you think the caves will be a safe place for us?” Megan frowned. “They can’t be. Some of the rocks

on the coast are tumbling into the sea?”

…..“Perhaps they may be safe enough, but I’m not really sure. At least the caves will offer shelter from the

sun. I feel so cross with Scratchit today. The silly little Cyclops has brought us here and dumped us on

these islands,” Stefan mumbled in annoyance.

…..“But, I’m seriously worried, Stefan.” Megan sighed in despair, “What if…we really are alone on these

Magic Islands, and there is no one here, to help magic us back to Wales? What if…there is no food for us

to eat… or fresh water to drink, and we dehydrate?

My Thoughts: Author Irene Edwards teaches children about planet earth and the cosmos in this fun,

Trevor is not known for being serious. In fact, he is best known for the tall tales he spins. He is new in Wales, living with his grandparents, and making friends has been easy. His personality is one that lends itself to laughter, jokes, and many a light-hearted moment between friends. When Trevor and his pals are exploring the beach one day, something happens that changes all of their lives, and Trevor’s love of a good joke is getting in the way of his ability to communicate with the adults around him. When no one believes what you say, how do you tell them your friends disappeared before your very eyes?

Magic Islands, by Irene Edwards, is a fantasy adventure centered around magic, wizardry, and adventure. The imagery painted by Edwards is absolutely stunning and contributes to the beauty of a well-crafted fantasy. Edwards’s young characters are relatable and full of life. The humor woven throughout this novel makes it not only more appealing but serves to create a fun read aloud for classrooms, as well.

As a fan of fantasy adventures and a teacher, I thoroughly enjoyed Edwards’s work. It is a light-hearted adventure based on the wonder of magic. There aren’t many young readers out there who don’t become enthralled in stories of the impossible, and Edwards has more than successfully tapped into that demographic. Her young characters are bold and just the right mix of the real world and fantasy.

The wizards and witches in Edwards’s work transport readers to a fabulously designed land of spells, castles, and absurdly fantastic beings. Page after page, the dragons and monsters continue to keep the story new and refreshing. Combined with the witty exchanges between characters, the wide array of character types makes this an all-around fantastic read for young readers.

From cover to cover, Edwards enchants young readers, pulls them into a fantasy like no other. In addition to the wonderfully engaging storyline and humor peppered throughout, Edwards includes famous names and well-known pop culture references that further serve to hook readers. I would be remiss if I did not mention the marvelous sketches by the team of illustrators, Robert Brown, Tony Paultyn, and Gareth Edwards. I highly recommend Magic Islands to anyone looking for an engaging story for young fans of fantasy and wizardry. Teachers in grades 3-6, this one’s definitely for you! 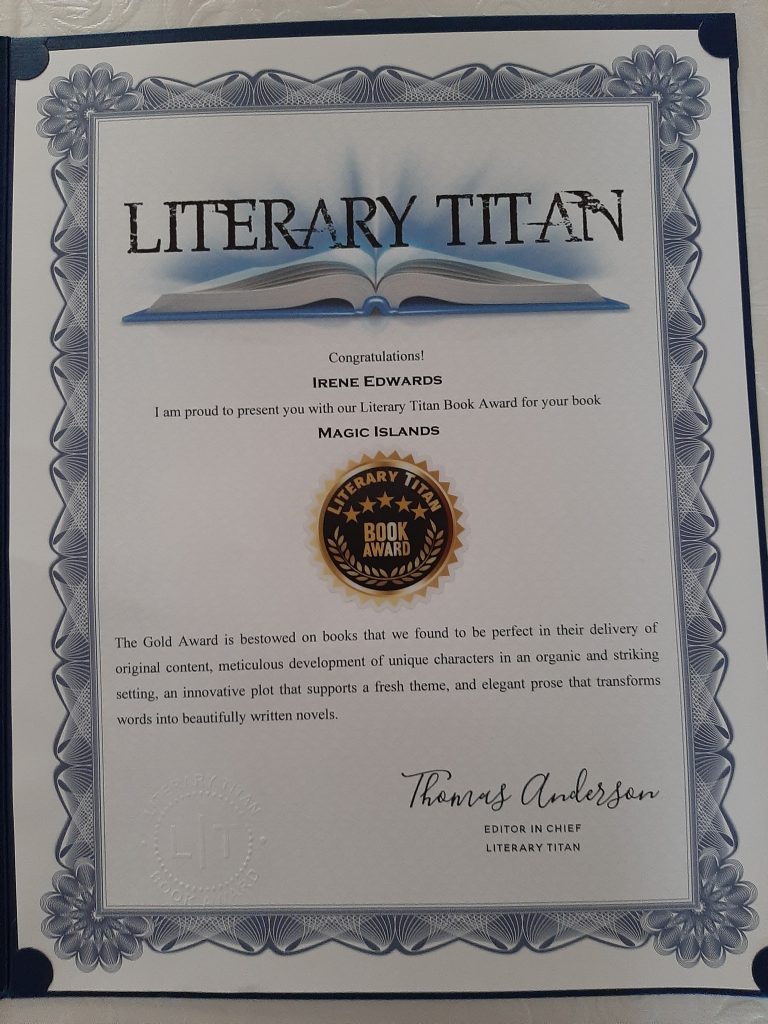 We are proud to present you with our Literary Titan Book Award. Your book was recently reviewed through our Book Review Service, with that service your book is entered into our Literary Book Award competition. Your book deserves extraordinary praise and we are proud to acknowledge your hard work, dedication, and writing talent. Start telling the world that you're an award winning author, because we will be!

Please find the book award image below. Display it proudly on your book's cover, or anywhere else that you want to display it. You will also find an award certificate below and your book title will be listed on our award winners page.

Thank you for letting us read your fantastic book. 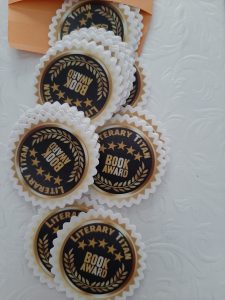